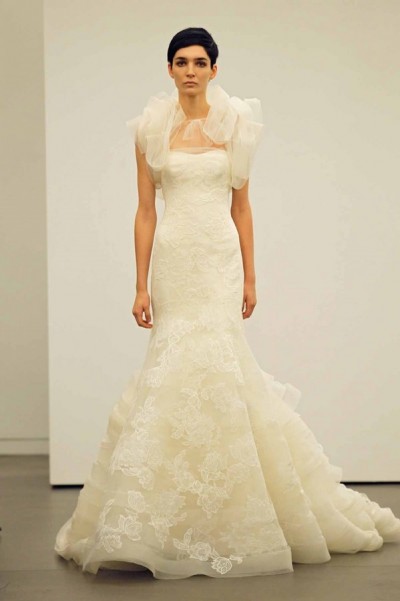 VeraWang's wedding dress is one of the most beautiful wishes of many girls in their life, confirmed that VeraWang's first bridal salon in the Mainland is about to be settled in Shanghai Xintiandi. "Recently, a talk about the" Queen of Bridal Veil "to the mainland shop opened thousands of microblogging caused thousands Netizens hot, reporters yesterday from Xintiandi and brand verification was informed that VeraWang flagship store is indeed planned to be settled in mid-December Xintiandi, the store will be its largest and most complete flagship store in the world.

Reporters learned from the Xintiandi, VeraWang Mainland's first flagship store will be located in the Xintiandi fashion mall, at present, Huangzuo South Road, Zizhong Road intersection has been tall, "This location is our former sales office, an area of â€‹â€‹Xintiandi fashion The shop does not look small. "

Subsequently, the reporter asked inquiries to contact the brand responsible person, the source said Xintiandi store will be VeraWang's first store in the Mainland, covering two floors, an area of â€‹â€‹about 800 square meters, is the world's largest flagship store, The store is equipped with not only three bridal lounges, but also VIP lounges and separate parking entrances.

The store will become the brand of the world's most complete range of merchandise stores, is currently under renovation, is expected to be open in mid-December, next year in Beijing, Chengdu and opened two stores.

"This store will cover the wedding dress, two major categories of dress, each dress is tailor-made." The person in charge, the customer needs to be about 5 months ahead of time to store fitting, two times, if expedited , Will be subject to a certain fee. The price of each dress in the store about 30,000 to 200,000, mainly for high-end white-collar workers.

For the "Queen of Wedding" to open a shop in Shanghai, many users expressed concern that netizen "Lanlan Cui 89" feeling: "prospective groom to be spent." Netizen "unscrupulous" said: "When married to wear VeraWang wedding, which is the dream of every girl. "But there are users feeling its price is too high, ordinary people unbearable, friends" hs_ Fu Xin xiang "commented:" At every turn more than ten million, hundreds of thousands of yuan The wedding dress is not affordable for every girl. "